At three this morning, the drums beat the men to their colours, but only by 10 are we ready to march to Axminster. In the van is the Red Regiment, numbering near 800, now under Major Wade, for Col. Venner is wounded after the Bridport fight. Next comes the Holmes and his Green Regiment, of the same size, followed by his Grace with six troops of horse and a commanded company from Lyme itself, then we have our cannon and baggage. To the rear is Matthew’s Yellow which is the smallest at just 300 men, finally in the rear-guard is Col Ffoulkes with 500 men of the White Regiment. As we left Lyme, we bid farewell to the Heldevenburg for she sailed has put to sea, together with Col. Fletcher. So, we now have no options but to fight for our cause.

It was no slow pace that we set ourselves in the van, my friend Capt. Richard Goodenough with his company is at the head of the Army. Whilst I am some way further advanced with Capt. Kidd. On reaching the crest of Shoote Hill, we can spy some four miles distant, the Red coats of the Militia moving towards Axminster in two columns. They have the edge on us to reach that town first, but seeing Richard was not far behind and sending word to his Grace and Major Wade, we agree to double our pace for the short distance to Axminster. As we reach the town the advantage is ours. So, not wishing to delay, Richard takes three files to the north of the town, whilst I take three more to the west. Whilst, Capt. Kidd moves forward with the remainder to secure the town proper. 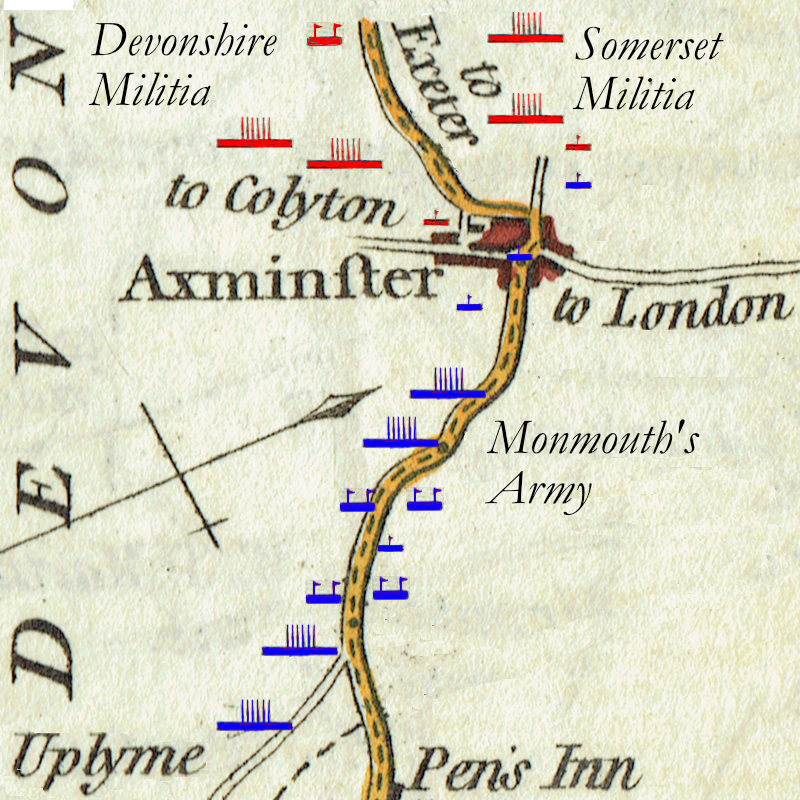 As I advance with my three files of musket, some enemy scouts appear 30 paces from us. With my blood up and the good heart of my men behind me, we cheer and double our step. Too our joy, on seeing us closing fast, the enemy turn and run. When we reach the hedge, from where they had come, some 200 paces away I can see the Yellow Regiment of the Devonshire Militia. Quickly, lining the hedge, I order the sergeant that he should ready the men and shot off one or two volleys, before letting the men fire as fast as they can load. With this quick action, our men cause enough discomfort on the enemy that they do not advance or close with us. After a playing shot on them for sometime, Major Wade brings up another two companies and a stand of pike, together with one of our small field pieces. Thus reinforced, we now advance to close but once more our posture breaks the enemy resolve and they flee, casting off their coats and weapons for us to collect. Whilst, in the ditches we find a good number of men willing to join our ranks, which we welcome with open arms. After the fight we discover that the same was true on the north of town and the result is that we now have a fine looking bunch red-coated companies. This evening we camp to the north of Axminster and have set strong out-guards to ensure we have warning of any attempt by the enemy.